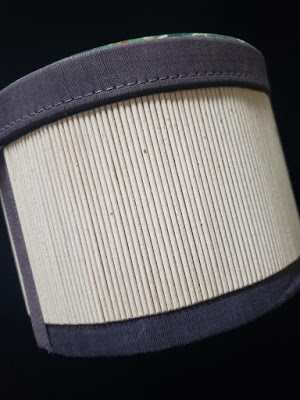 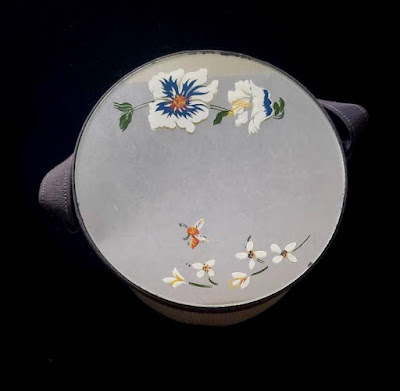 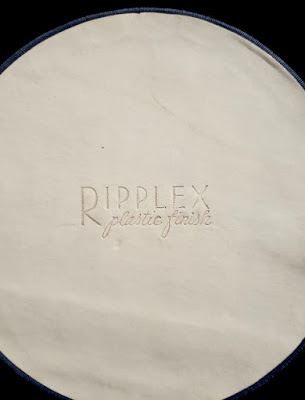 What an amazing find for The Vintage Purse Museum! Upon researching this beautiful bag, we went down quite the rabbit hole! We discovered that Louis Carl Levine was in the plastics business with his brother in New York in the 1940s. We believe that this company was involved somehow in the manufacture or acquisition of Ripplex, the material used for the exterior and underside of this handbag. (Note: Seamless Rubber Co. of New Haven, CT made a bathing suit using the Ripplex name; we have no proof that this material and Mr. Levine's material are the same.) Other Ripplex styles of handbags were made, but--per the newspaper ads we found--it seems they were only sold for a short period of time. We discovered patents and advertisements for these handbags (see below). Carl (as he was known) eventually became a college professor. He and his wife Gus (Gusta) were involved in many charitable, social and historical causes, and were instrumental in getting the U.S. to issue a postage stamp honoring Raoul Wallenberg, a Swede who saved thousands of Jewish lives during the Holocaust.

We were incredibly lucky to connect with a relative of the Levines, who graciously shared their story and a photo of them. Scroll down to learn about them, and to see patents, ads and articles chronicling  this remarkable couple.

Gus and Carl Levine
Written by Wendy Kurland, great-niece of the Levines

"Louis Carl Levine, 1907-2002, was one of the three children of an orthodox Jewish family who made their living on a loom in the tenement apartment.  Their major product was passementerie – gold braid to trim the epaulettes and garments of the 1920s and 30s.  Everyone in the family took a turn so that the machine was in use all day and night.  Louis always told the family that the father, busy in the temple studying and praying, never worked enough to feed the family.  He claimed that the first time he every got enough to fill his belly was at his bar mitzvah at age 13.  An industrious student, he won a full scholarship to NYU.

His sister, Esther Gentle, an artist and gallery owner, married the expressionism painter Abraham Rattner.  They were life-long friends of Henry Miller, who wrote about their friendship in 1968 in 'A Word About Abraham Rattner.'

Augusta (Gus) Levine nee Lipstein, 1907-2004, was one of seven children, and the last to be born in the Settlement of Pale, the region variously encompassing Russia, Belarus, Lithuania and Moldova, much of Ukraine, parts of eastern Latvia, and her town Bialystok (not yet Poland).

Both families settled in Brooklyn New York where Louis became a friend of Gus’ younger brother Joey and a secret admirer of the beautiful Gus.  For a college essay contest comparing Friedrich Nietzsche to Karl Marx, he asked Gus, a typist in a Brooklyn company, to type his submission.  When he won, they shared the prize – a season pass to the nose bleed seats at Carnegie Hall.  Their first date in 1927 was to see 11-year old violin prodigy Yehudi Menuhin.  Gus would tell the story, and name the Beethoven Violin Concerto they shared, for the more than 75 years of their marriage.

Louis always gushed lovingly at Gus that he married her because she could type.  She would reply that she married him because he could write.

Gus and Louis began a small factory in Brooklyn – Carl Levine & Co, NY, that produced purses in the 1930s to 1945.  They held a number of patents for designs – most originating because the scarcity of materials during the depression led to iconoclastic solutions.  Their favorite, and most successful, was sparked when the local Brooklyn Army Terminal trashed more than a million substandard tongue depressors.  At the same time, each day the local Eastman Kodak factory was tossing the exposed film from the end of the cutting machines.  Gus and Louis printed flowers, plaids and other designs on the film and then hired local immigrant women to glue the wood strips to the back.  (The women brought their children to work in one of the first in-factory daycare programs).  The finished product was rolled, much like the tambour on a roll top desk, to become a summer purse.  The design was so successful that other larger companies stole the look and flooded the market with copies (not made with recycled material).  Other Levine & Co designs used junked men’s ties to wrap and close winter bags, and a hand-painted mirror top basket – combining purse and makeup mirror in one.

Gus and Louis closed the factory near the end of World War II to join the American Friend’s Service Committee (Quakers) work with displaced Jews who escaped to Sweden.  In 1946, they were based in Stockholm expediting shipments of food and clothing from neutral Sweden to the starving refugees in Finland and Germany. Gus says they were so good at the work because of their experience sourcing materials and manufacturing handbags.

This time in Sweden began their lifelong interest in Raoul Wallenberg for whom they wrote a play (Raoul Wallenberg, Tribute to a Lost Hero), advocated for a US postage stamp, had streets named, and more.  In 1947, they commandeered an abandoned army Quonset hut in Bremen, Germany and opened America House, a temporary shelter for Jews released from concentration camps.  They managed to find permanent homes in South America, in Israel, in Canada and the United States for hundreds of families.  Many maintained contact and friendship with the Levines for the reminder of their lives.   AFSC work during this time won the Nobel Peace Prize in 1947.

Gus went on to work for the group that became the ACLU while Louis got his Ph.D. with a vision of working in the new Israel.  In the late 1950s, they returned to the US where Louis served on the faculty of the Colorado State University Pueblo, and then in the Colorado State University’s English Department until his retirement in the 1970s.  He developed a course work on the literature of social protest, and worked on the behalf of migrant workers and those in mental institutions for the rest of his life.

They kept none of the purses, and it is a great hope of their families that a few will turn up like this example in the museum."

Note from The Vintage Purse Museum: A huge thank you to Ms. Kurland for this information. If you have a Levine bag and wish to sell it, please contact us at info@vintagepursemuseum.com, and we will put you in touch with her. 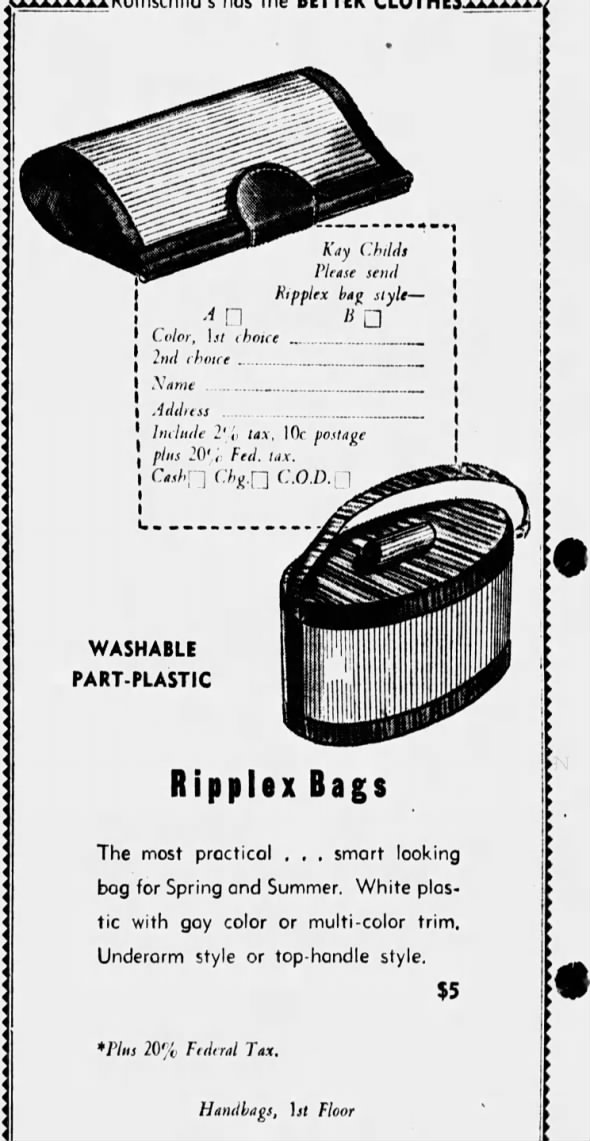 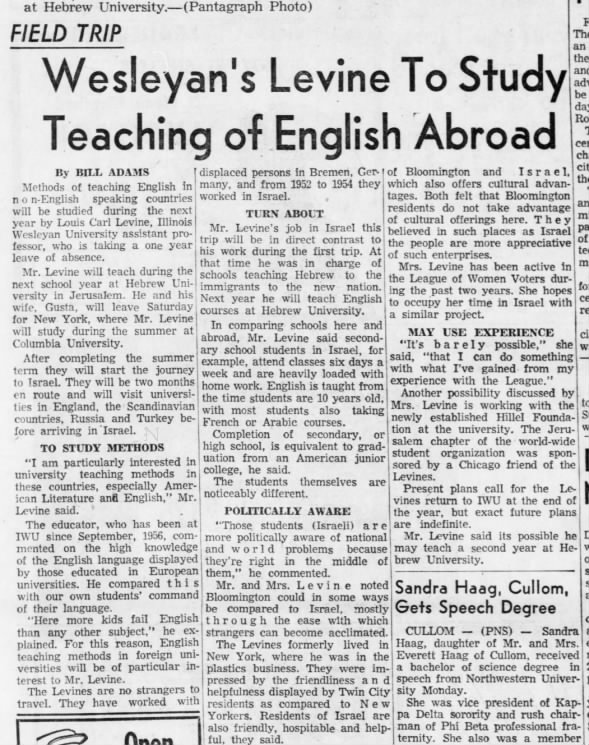 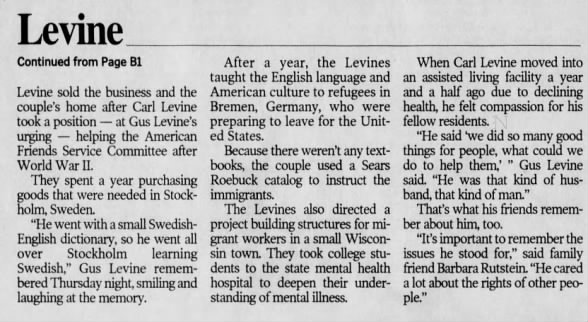 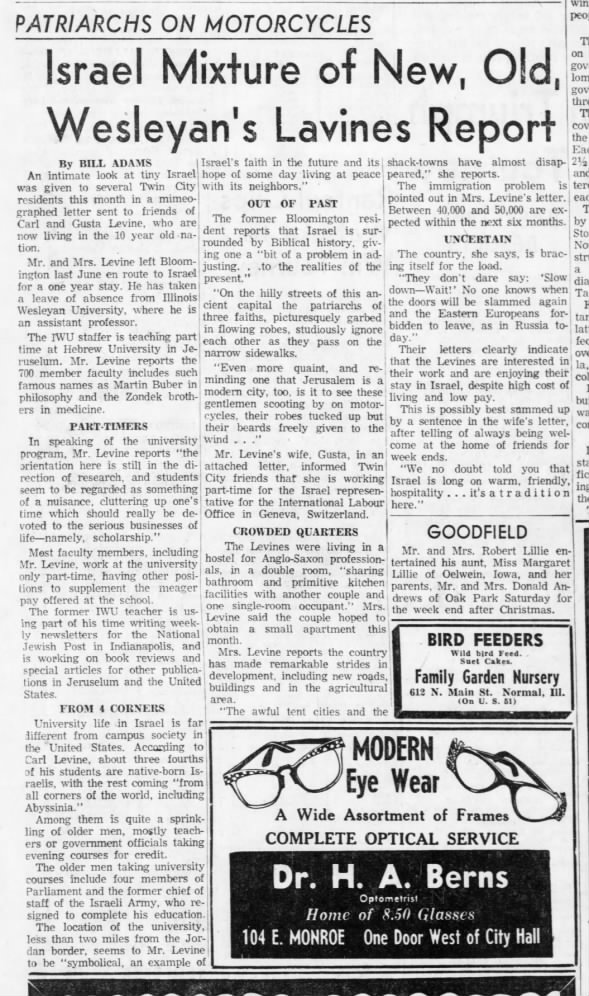