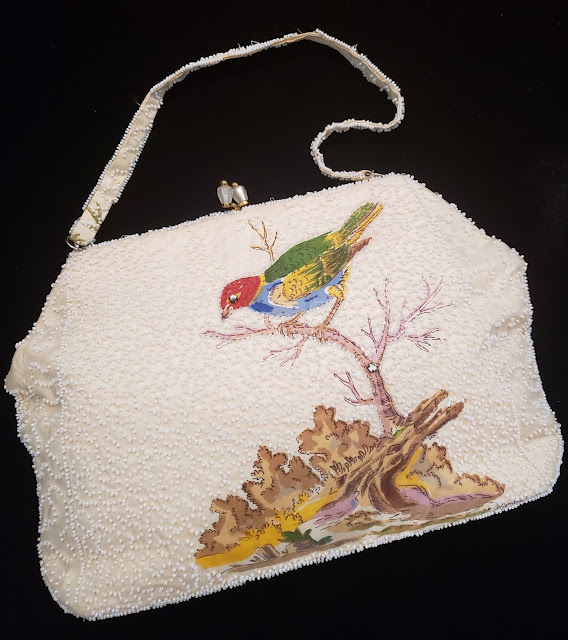 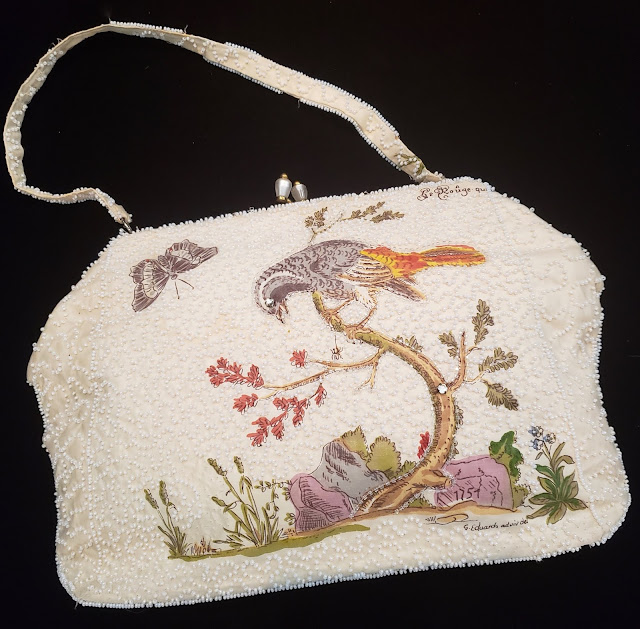 Beaded Walborg handbag with fabric bird designs on both sides. Made in West Germany, 1950s.        From the collection of The Vintage Purse Museum.

The Vintage Purse Museum was delighted to speak with Janet Amalia Weinberg, Ph.D, author, psychologist and world traveler, about her aunt Hilde Weinberg, founder and designer of Walborg handbags. Other information in our biographical article was gleaned from genealogy websites, online documents and newspaper archives.

As with all our articles about mid-century handbag and accessory makers, our goal is to educate and inform. When we resolved to accurately research Hilde Weinberg and her company, we had no idea how much there was to share and how incredible her life truly was.

Hilde Henriette Cahn was born June 17, 1904 in the German village of Oberzissen, Brohital, Rheinland-Pfalz to Leopold, a cattle trader, and Julie (née Berger) Cahn. She had three sisters and a brother.

Janet Weinberg tells us that Hilde was always independent and adventurous. Residing in Germany, before the war, two of Hilde’s sisters, Gerda and Johanna (“Hanna”) had apprenticeships while Hilde, at about 20-years-old, worked as a buyer at a department store in a nearby city. In 1931, she married Richard Weinberg (born 1902 to Levy and Amalie Weinberg, who had seven children). Hilde’s sister, Else (“Elsa”) married Richard’s brother Werner, and were Janet’s parents. Richard and Hilde had no children. Janet was close with her aunt, who would occasionally take her on business trips.

While there were few women executives in the 1940s and 1950s, Hilde created personal relationships with those who appreciated her management style—which, says Janet, was not cutthroat or competitive. To Hilde Weinberg, it was all about inventiveness, positive relationships, and a beautiful, quality product.

On April 8, 1936, three years before World War II began in Europe, Richard and Hilde Weinberg boarded the RMS Aquitania (British ship in the Cunard line; in service from 1914-1950) in Cherbourg, France. They arrived April 14, 1936 in New York. The ship’s manifest has Hilde’s name misspelled “Hilda.” It lists Richard as a “clerk” and Hilde as a “h-wife.” Their “race or people” is “Hebrew.” (Note: One of the Cahn children, Hilde’s sister Hanna, b. 1912, was killed at Hadamar, Germany in 1941. Their mother, Julie Berger Cahn, was at the family home in Oberzissen, Germany when she died of an illness in 1938 while waiting and hoping for her daughter Hanna to be released. Hilde’s remaining siblings escaped to the US.)

A person (name withheld for privacy) related to a different branch of the Weinberg family told The Vintage Purse Museum that the Weinbergs’ 1942 naturalization petition showed that Richard worked for “Manne and Weill” in New York City. Manne and Weill was a glove manufacturer whose products were sold under the name “Dawnelle.” A 1958 article in Handbags & Accessories magazine, a trade publication, is about Richard joining his wife’s business, the Walborg company, and confirms that he worked for Dawnelle for 22 years. The article says he would continue to work for Dawnelle while vice president and treasurer of Walborg. Hilde Weinberg, referred to in the article as “Mrs. Walborg,” was president.

Various old articles and documents show that Hilde Cahn Weinberg began working for Alexandra de Markoff cosmetics shortly after arriving in New York in 1936. She worked her way up to vice president and then left the company in 1949 after its acquisition by Charles of the Ritz, another cosmetics firm.

According to Janet’s cousin Ruth (daughter of Hilde’s sister Gertrude “Gerda” Herz), Hilde had started a small accessories company with another woman in the 1940s while working for Alexandra de Markoff. The Danish-sounding name “Walborg” was an amalgamation of their last names. While the partner has never been identified, The Vintage Purse Museum speculates it may have been Florence Weill, whose husband Alexander, owner of Mann and Weill, passed away in 1949. According to a 1971 interview with Hilde, after leaving Alexandra de Markoff in 1949, she said she took a year-and-a-half to study the handbag business. (Note: This possible partner is only speculation and was not confirmed by anyone we spoke with for this article.) Hilde bought out her partner’s share of the company but kept the Walborg name, using it as her own as early as 1945, per an Alexandra de Markoff company-related document found online by The Vintage Purse Museum. This explains why many articles and advertisements about Walborg handbags often refer to “Hilde Walborg” or “Hilde Walborg Weinberg.” She essentially used the name as her corporate identity, which her family members believe was to keep her company separate from her husband’s career in the glove industry.

The earliest newspaper advertisement for Walborg bags found by The Vintage Purse Museum was from 1952. In 1954,  the Walborg Corporation was located in New York City at 149 Madison Ave., a 12-story building constructed in 1916. (A 1954 article about the new showroom was in Handbags & Accessories magazine, a trade publication, and can be seen on The Bag Lady’s website: http://bagladyemporium.com/BLU/index.php?n=Main.WalborgCorporation.)

One of the most popular types of Walborg bags produced during the 1950s are heavily beaded, in outfit-complementing colors such as white, black and bronze. Hilde Weinberg realized early on that she could make use of resources that, after the war, had significantly diminished in productivity. This included the beadwork of Belgium, which, says Janet, was a cottage industry, employing many home-crafters. By importing handbags made with high-quality Belgian beads, she reinvigorated their exports, so much so that she received high honors from the Belgian government. (The Vintage Purse Museum contacted the Belgian government for info. As of publication of this article, we had not heard back from them. We will update if they respond.)

Janet remembers participating as a model in a few of the elaborate fashion shows held by Hilde at high-end hotels such as The Pierre (still in existence at 2 East 61st Street At, 5th Ave, NYC). There were hundreds of buyers in attendance at these shows, and Hilde hired top New York models to walk around and display Walborg handbags.

Hilde also imported handbags from Japan. Janet tells a humorous story about visiting Japan on a business trip with her aunt. The Japanese businessmen were used to hosting male business executives from the US, so they did what they always did—they took Hilde and Janet to a geisha house. They were each assigned a geisha; Janet’s was very interested in American fashion, including Janet’s hair and outfit. Then, the businessmen took Hilde and Janet to a few bars, per their standard treatment of visiting executives—who up to that point, had always been men.

Over nearly three decades, the Walborg company, under Hilde's leadership, imported handbags from numerous locales including West Germany, France, Belgium, Hungary, Macau, Japan, Hong Kong, Taiwan and China. Another of Janet’s stories is that of a late-1960s visit to Taiwan as honored guests of Madame Chiang Kai-shek (born Soong Mei-ling, 1898-2003), First Lady of the Republic of China, wife of Chiang Kai-shek (1887-1975), President of the Republic of China. On this trip were Hilde, husband Richard, and niece Janet. They met with Madame, who had been educated in the US, and was a graduate of Wellesley College, and was, by all accounts, brilliant, beautiful and charismatic. Hilde had shared her expertise about the US marketplace and, says Janet, gave them important details about the American color sense, which was very different than that of the Chinese. As a gesture of appreciation to Hilde for helping establish a cottage industry of hand-work, Madame arranged for three separate limousines to transport each of the Weinbergs to a special Easter service. The Weinbergs were accompanied on their journey to the chapel by a representative of Madame. Amalia recalls that Chiang Kai-shek himself was present at the chapel, but didn’t speak with the Weinbergs.

Among Hilde’s other significant contributions to fashion was the creation of the 1960s Richere line of handbags. A play on husband Richard’s name, the Richere bags were Walborgs, but at a more affordable price point for the consumer. One website says that this line was trademarked in 1967; however, The Vintage Purse Museum could not find any evidence to support this. There was a 1962 trademark for a line called “Walborg Petites” which was described as “children’s handbags and purses.” We discovered a 1967 newspaper ad for “Walborg’s spring petites,” but these handbags did not appear to be marketed for children.

In 1971, President Nixon implemented a “defend the dollar” program, which created import surcharges on items from numerous countries, including Japan, with which Hilde had a lengthy and successful business relationship. She was quoted as saying in an article about rising import tariffs, “Prospects are good. We are emerging from an era of the 'poor look' into what I would call a 'civilized look,' and the beaded bag and the tapestry bag will again have their inning. We must remember that next to shoes, handbags are the most important accessories in a woman's wardrobe."

In the 1970s, Hilde Cahn Weinberg was diagnosed with cancer and sold her company in 1974 (likely to Rockley Group, whose subsidiary La Bazoche, Inc. also owned Coblentz handbags). She passed away February 1976 at age 71 at New York Hospital. Her New York Times obituary is surprisingly brief, but it does say that she “organized the Walborg Corporation in 1941 and was its chief designer. She received honors from Belgium, Italy and Hungary for her role in developing international markets.” She was survived by her sisters Elsa and Gerda, brother Joseph (Josef), and her husband Richard. He died in 1987 at age 85.

Walborg bags remain highly collectible today. Every one of these handbags—beaded, tapestry, crocheted and more, from countries all over the world—represents a pioneering businesswoman and bold designer who proudly put her personally chosen name on them.

Email from another of Hilde's nieces, Jean Herz Begue (reprinted with permission): "Janet and I spent several summers doing office work work at Walborg. While in college in Chicago I was able to continue supplying information about fashion trends, even designing some handbags.  Hilde and Richard were wonderful people; kind, thoughtful, good humored, generous and intelligent.They set a high standard in their personal lives as well as professionally. They were also very family oriented; my parents, sister and I lived in Chicago but there were frequent phone calls and visits back and forth. My husband went to work for Walborg as Controller in 1967 until the company was sold. We had two children and spent many wonderful times with Hilde and Richard at their second home in Brewster, NY.  They loved to entertain and were wonderful hosts. They especially loved children. At one of the Walborg fashion shows, Hilde received a medal from Belgium, recognizing her importance in revitalizing the beaded handbag industry. Thank you for creating the Vintage Purse Museum." 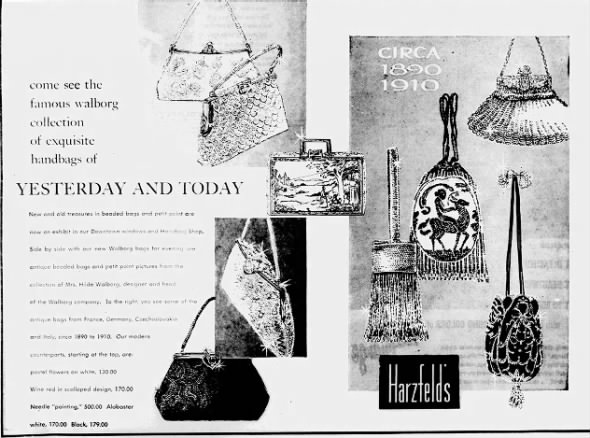 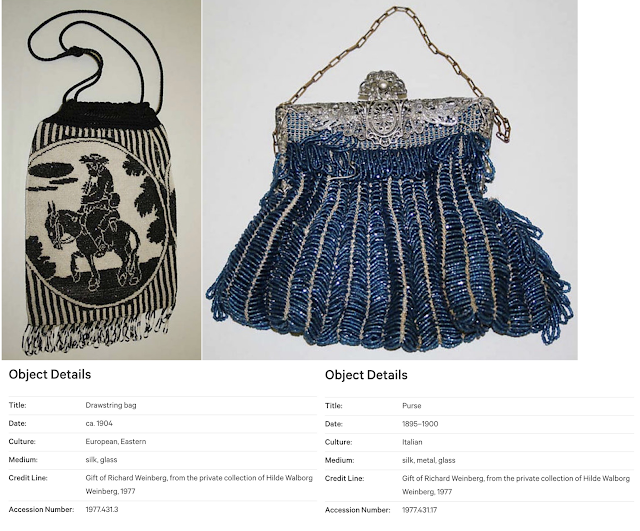 Screenshot of vintage bags from Hilde Weinberg's personal collection, which are similar to the ones shown in the 1965 article above, donated to The Met by Richard Weinberg in 1977 after Hilde's death. Photos and accession details from The Met website. 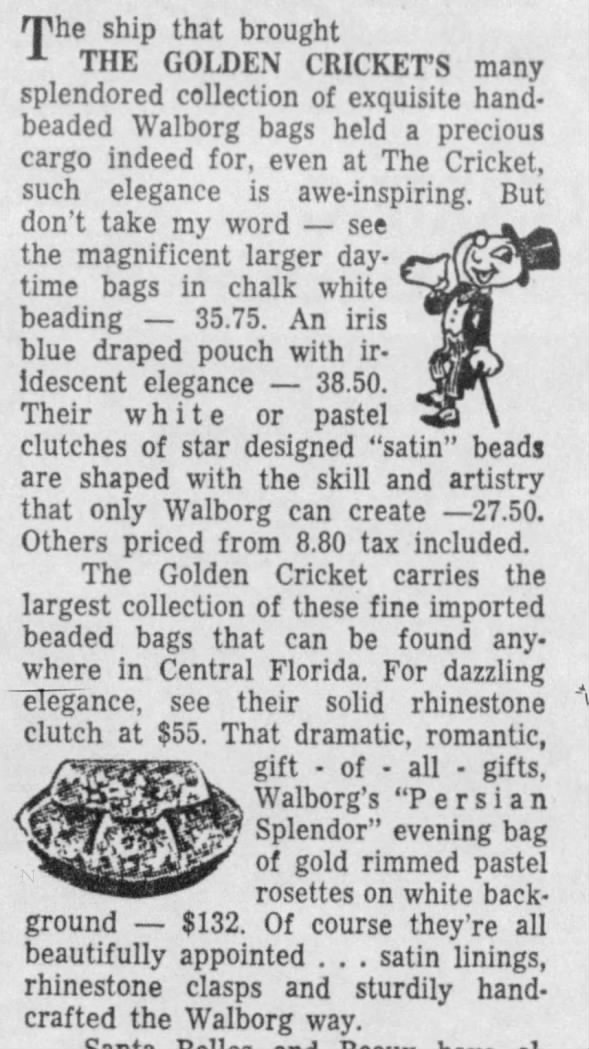 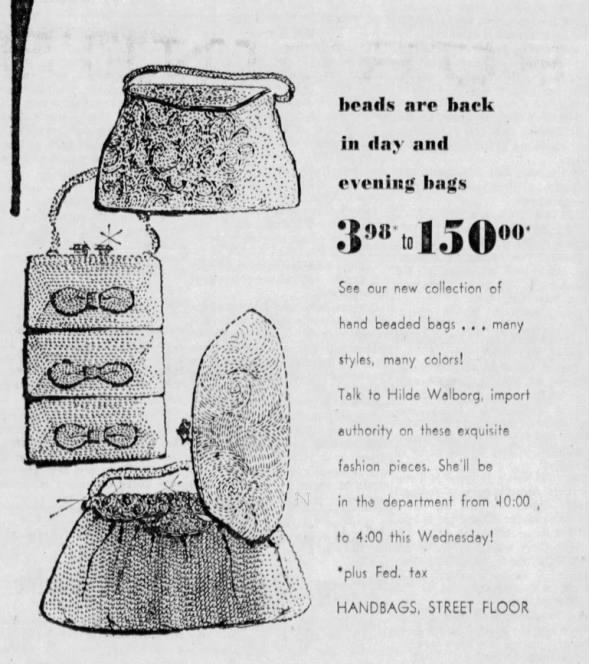 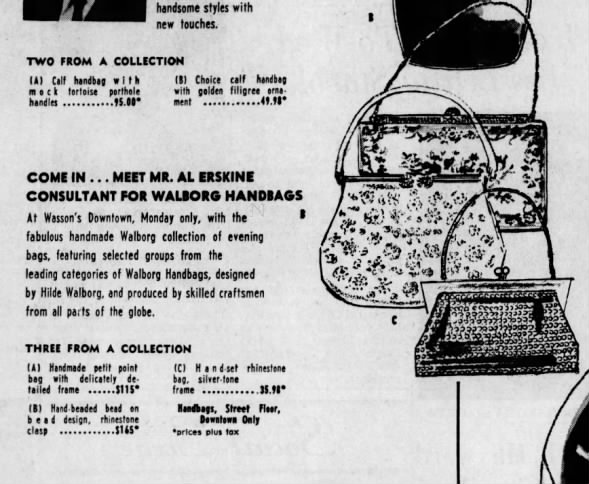 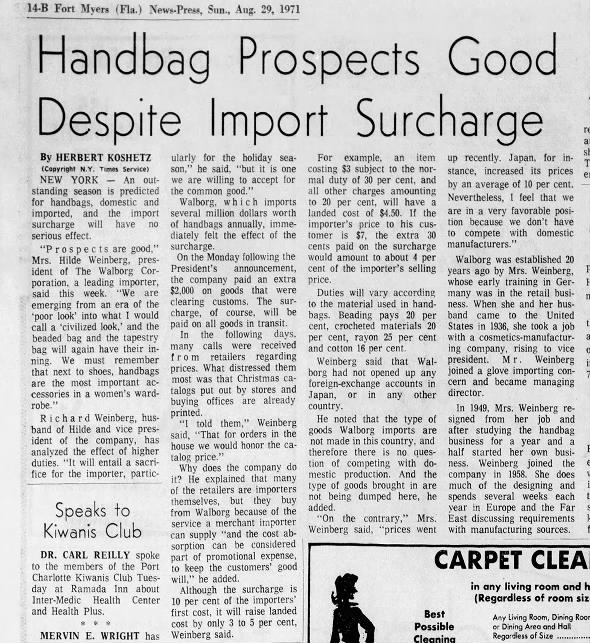 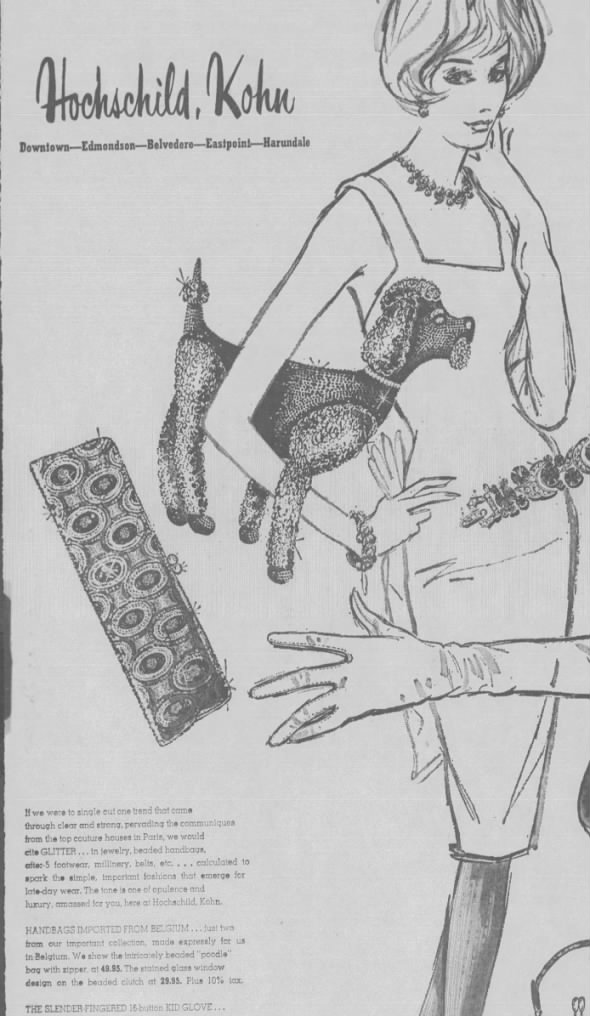 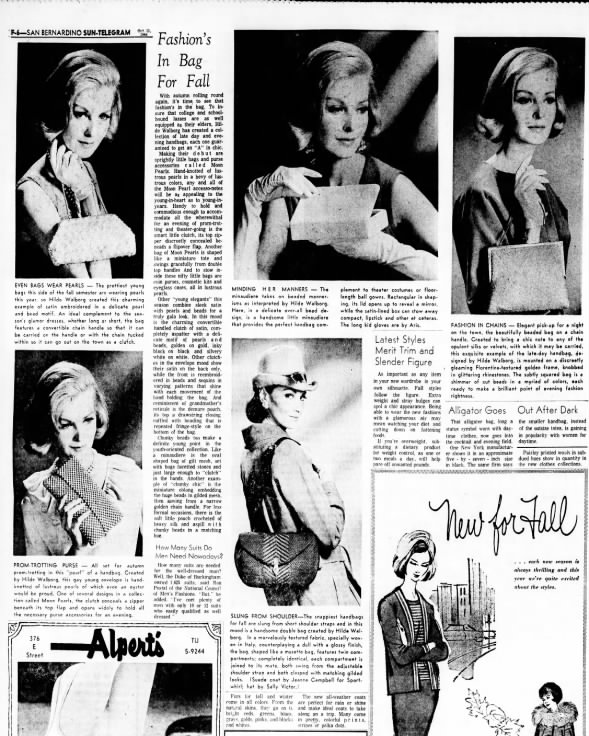 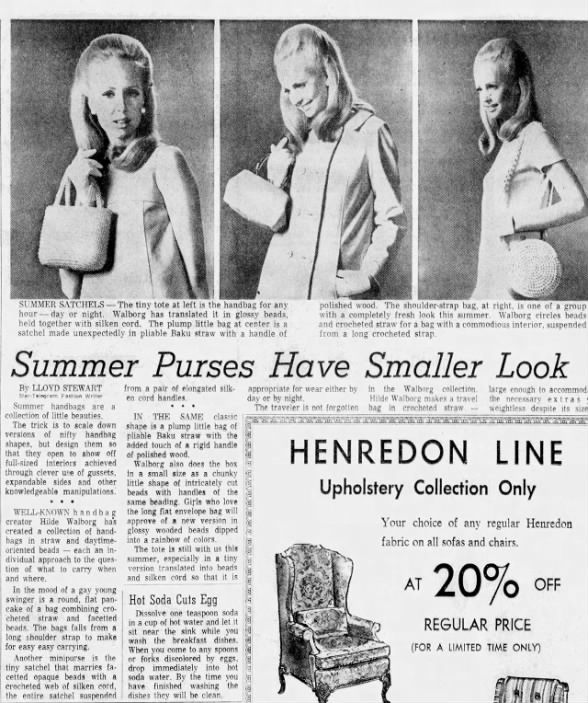 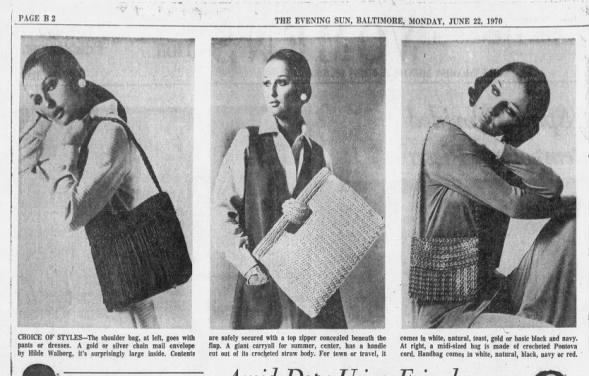 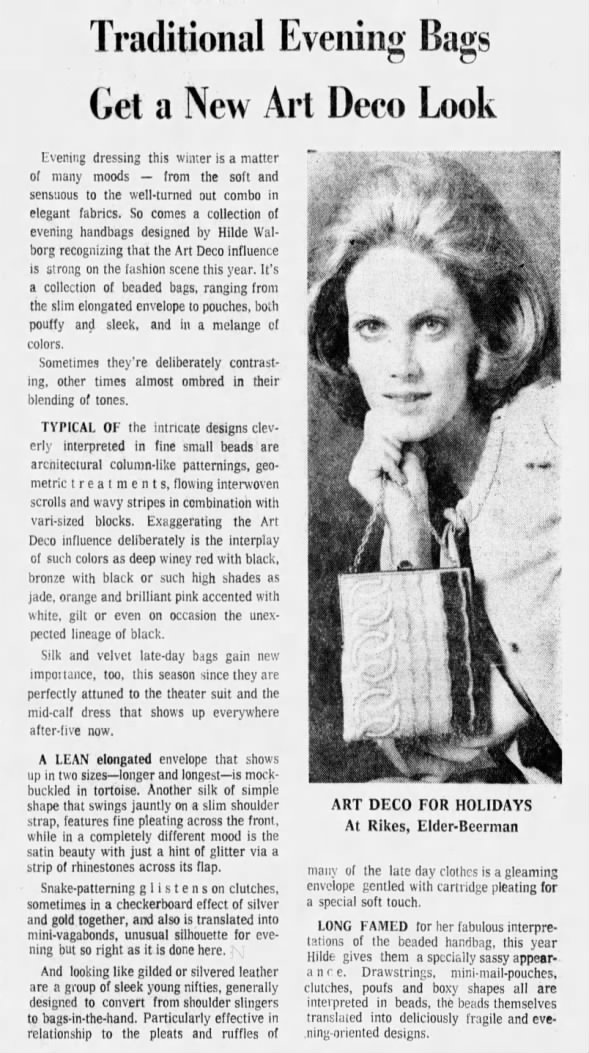 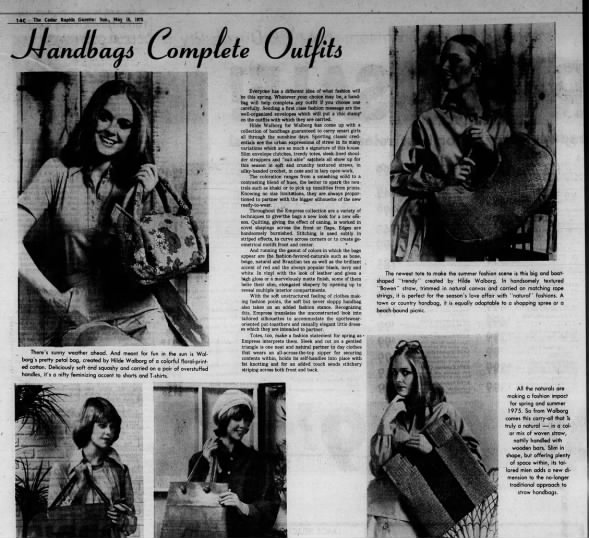 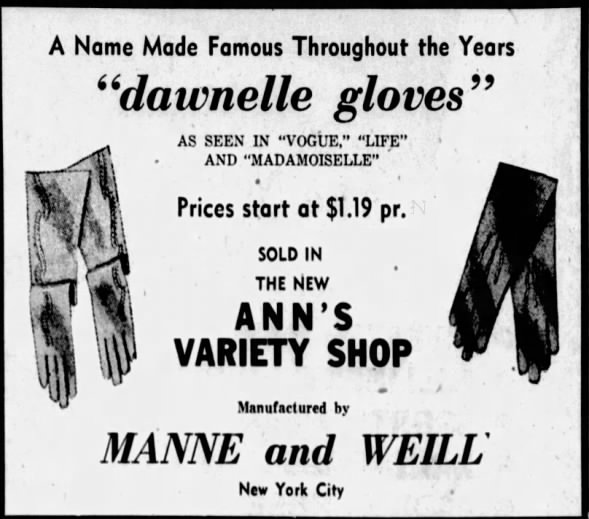 Fri, Oct 6, 1944 – 10 · The Daily News (Lebanon, Pennsylvania) · Newspapers.comCompany that Richard Weinberg worked for when he arrived in NYC in 1936 and was still working for when he joined Walborg in 1958.
Hilde Weinberg interview special post Walborg