SPECIAL POST! The History of Magid Handbags - Includes Info From Relatives and Employees

The Vintage Purse Museum was intrigued by the longevity of the Magid brand of handbags, and was delighted to speak with former employees and relatives of people who were part of this company over the years, as well as descendants of its founder Anna Magid.
According to the 1910 US Census, Anna Magid (pronounced muh-JID) and her husband Isaac were living in the Bronx with their five children, Augusta, Sadie, Frances, Morris and Leon. Anna was 38 at the time and had her own millinery shop. Isaac’s job was listed as “foreman” at a “cap factory,” although the Magid family says he worked in a factory that reprocessed rags. (“Cap” instead of “rag” may have been a spelling or attention error on the part of the Census taker.) The Census says both were born in Russia, but other documents show Anna’s place of birth as Lithuania or Poland—possibly due to ever-changing geographical boundaries. It’s probable her birth name was “Hannah,” and was Americanized to Anna when she emigrated to the US around 1892.

A genealogy website and other online resources* say that in 1915 Anna was president of Hygrade Ornament Co., 4 W. 37th St., New York, NY. It doesn’t indicate if she and Isaac ever owned this company, but one website says she worked for others while at Hygrade (a millinery ornaments company, per a 1918 classified ad). She left Hygrade in 1916 to form her own company. 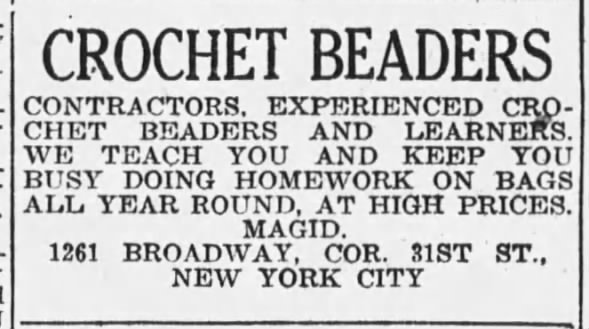 The earliest Magid newspaper classified ad we found was a 1917 advertisement for beaders and crocheters, with an address on Flatbush Ave., a famous street in Brooklyn, NY. This is likely when Anna’s company, “A.I. Magid,” began to flourish. These ads continued over the years as they moved to larger locations. Per a 1920 advertisement, they were also repairing handbags.

It’s not clear if the “I” in “A.I. Magid” stood for her middle name as there is no evidence that she had one. Perhaps it was for Anna’s husband Isaac, who, by all accounts, was more of a passive partner, with his wife the primary architect of the business. (Her 1922 passport application indicates the “I” is for “Isaac.”) 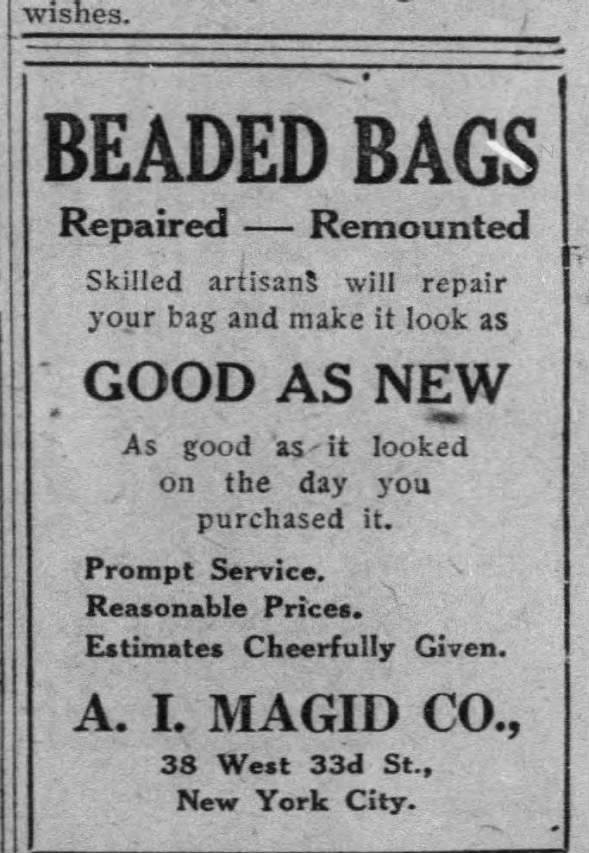 What’s also unknown is how she came up with the logo for her company, a stylized “M” inside a circle, between two wings. This flying M is still visible as a painted sign on the side of the building at 30 E. 33rd St., the Magid company’s longtime former factory, warehouse and showroom address. It also appears on some of the labels or ink-stamped inside older Magid handbags.

Anna’s daughter Augusta (Gus) was also an important part of company management, as well as a talented designer who took out several handbag trademarks with the US Patent Office under the Magid name. The Vintage Purse Museum was fortunate to speak with textile artist Bette Levy, Anna’s great-granddaughter and Gus’s granddaughter. She gave us permission to use the following paragraph from her artist’s statement.

“Fine arts and needlecrafts have permeated the lives of women in my family for generations. At the turn of the century, my great-grandmother, Anna Magid started a beaded handbag company in New York City, and her daughter, my grandmother, was the designer. Two of my earliest memories relate to Magid Handbags. In one memory, I am sitting on the floor in one of the workrooms, playing with thousands of seed beads, self-strewn all over the floor, while Pia, the Italian beader, minds me. In another memory, I am lying at the foot of my grandmother’s bed while she designs and pricks out bead patterns on tissue paper attached to a wooden board. My mother also was a creative woman...a clothing and interior designer, as well as an exhibiting painter and sculptor. I learned about creative art and needlework from these two women, my grandmother and mother. They were always creating with their hands, and I grew up surrounded by exotic fabrics and clothing, as well as sparkly trims, beads, and sequins - magical stimuli that delighted my senses and spurred my imagination. Throughout my life, I always loved and created things with textiles.”

During Anna and Isaac's retirement and after their passing, the company was run by sons Maurice and Leon and son-in-law Leopold Sneider. Maurice’s son Paul Magid says this (via email) about his father, who passed away in 2001 at age 102: “He only retired to Florida with my mother when he was in his sixties and no longer active in business. He spent his working life in the New York area. After my grandmother died, or not long before, he left the company and went to NYU and completed the college education that he had begun in the 20's when my grandmother pulled him out, luring him to come to work at Magid's by making him a buyer. Hence his frequent trips to Europe. He then began his real estate activities. He was a businessman first and foremost, and I do not recall that he had any interest in design or other artistic endeavors. He enjoyed his travels and was probably good with people. That was his strength as a buyer. I think his contribution to the company in other respects must have been exclusively in putting it on a successful financial footing.” 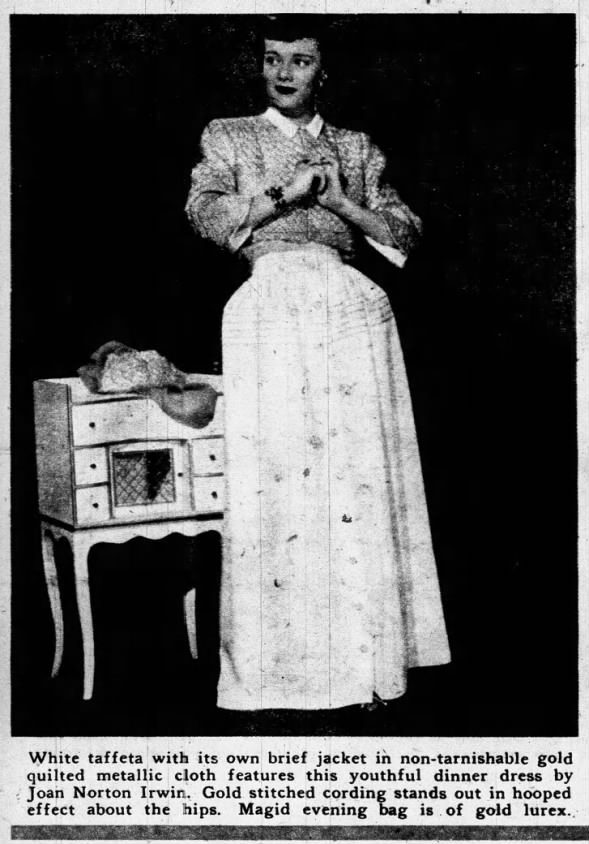 In the early years, when Anna and her family ran the factory, their products consisted of hand-beaded bags made in the US. During the mid-century, Magid was, and still is, known primarily for straw handbags and evening bags, first made in the US, but later imported from all over the world. Another notable style was a brief collaboration (1968-1969) with handbag artist Stella Jolles Reichman (1922-1997; see our 2016 interview with her great-nephew). While we were unable to confirm how this partnership came to be, we know that Stella was a designer of whimsical handbags in the 1950s for her mother Ida Jolles’s company (known mostly for its 1930s-1940s petit point purses). After the Jolles company ceased operations, Stella went on to style funky hippie-era bags for Magid, then had a career as an author, body positivity activist and spokesperson for Lane Bryant. 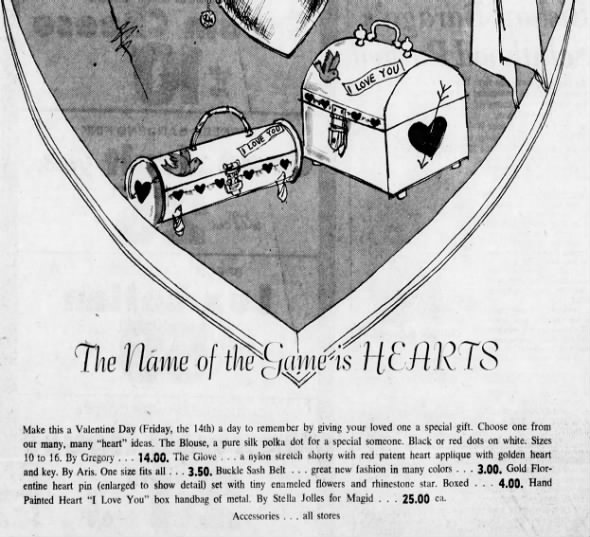 The Vintage Purse Museum found a 1964 article about the Magid company that cites Jerry Lederer (1908-1994) as a co-partner and designer for the business. We spoke with Suzinn Weiss, granddaughter of Jerry Lederer. Suzinn is a professional artist working in numerous forms including jewelry, painting and landscape gardens. She shared with us a memory similar to that of Bette Levy’s, where, as a young girl—perhaps a decade or so after Bette—she went to the Magid factory and saw women doing elaborate beadwork on evening bags. Suzinn has very fond memories of her grandfather and his second wife, Blanche, a jewelry designer, and cites Jerry as being a tremendous influence on her, encouraging her to travel the world as he had done.

One of The Vintage Purse Museum’s goals in writing this article about Magid was to fill in the timeline from 1916 to its current ownership. We were able to discern via online records that the company eventually came under the chairmanship of Lester Sebold (1925-2013). We spoke with Lester’s son Gary, who worked for the company as controller from the mid-1980s to the late-1990s and cites his time there as a great experience and excellent work environment, with friendly salesmen coming in after a long morning of sales calls to have lunch and play cards. Their offices were across the street from the Empire State Building, although they eventually warehoused their products at the Brooklyn Navy Yard, which charged more affordable rent than pricey Manhattan. Gary told The Vintage Purse Museum that his father was a wonderful man who’d started at Magid at the bottom, sweeping floors. He traveled quite a bit for work, says Gary, who didn’t know until years later that some of the politically volatile countries required that his father be accompanied by an armed guard while on handbag buying excursions. This didn’t stop Lester, however. It had become too expensive to produce handbags in the US, so they had to be imported from Milan, Barcelona, the Philippines, Guam, China and other locales, meaning he made many trips in order to keep retail customers supplied with the latest fashions.

We also spoke with a former employee and company partner who asked to remain anonymous. The employee, who started working at Magid in the late 1960s after leaving another well-known mid-century handbag maker, explained that the company’s leadership during this era, including Jerry Lederer and Lester Sebold, were able to work their way up the ladder over their years of employment while buying partner shares. This led to the sons and son-in-law of Anna Magid eventually phasing out their ownership.

The former employee told us he filled in wherever he was needed at first, and then became the warehouse and shipping manager. He was eventually brought into the showroom at 30 E. 33rd St. and became the liaison for the many buyers from department stores, boutiques and other types of retail outlets. He describes his years there as the kind of environment that made you happy to get up to go to work every day. He relayed to us a fun anecdote regarding the popularity of the “Kenya bag,” a straw tote that was all the rage in the 1970s, and variations of it are still popular today. He told us that May Company was a very difficult store for manufacturers to get into, but May Company management had heard that Magid was the originator of the desirable Kenya bag. In charge of the showroom at this point, the employee told us he created an elaborate display of Kenya bags to present to the ten buyers and two merchandise managers from May Company. He opened the doors of the display with a flourish and the May Company people simultaneously gasped at the beautiful collection of Kenya bags. Of course, they wanted to purchase them for their chain of stores. The employee made a deal—he told them they could have the Kenya bags at cost, as long as they also stocked Magid’s other lines of straw bags. It was then, said the employee, that he made friends for life. 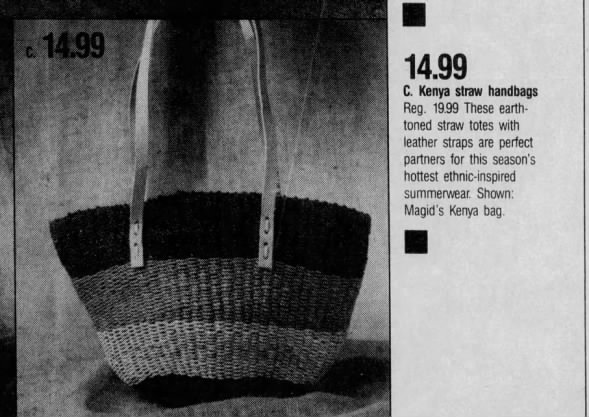 In the early 1990s, there was a recession. In 1999, the Federal Reserve raised interest rates to the extent that it created a financial crisis for numerous businesses. This was the year the partners sold the company to Y&S Handbags. Inc. The Vintage Purse Museum reached out to Y&S in hopes that they could offer some historical information about their acquisition, but didn’t hear back. According to online resources, Y&S owns the Magid trademark and is still producing bags under the Magid name. The former employee with whom we spoke worked for them for a number of years after they acquired Magid, but is now retired.
We can say with confidence that when entrepreneur Anna Magid established her handbag company in New York in 1916, she likely had no idea her surname would appear on labels in an incalculable number of handbags for over a century.
The Vintage Purse Museum is grateful to all who helped with this article. *Resource credit to New York City Signs 14to42 and Bag Lady University, which helped immensely with background for this post. Other information was found on Newspapers.com and genealogy website MyHeritage.com. Special thanks to Anna’s great-granddaughter Bette Levy, Anna’s grandson Paul Magid, Jerry Lederer’s granddaughter Suzinn Weiss, Lester Sebold’s son Gary Sebold, and the very kind and helpful 1960s-2000s former employee of the Magid company, who wishes to remain anonymous. We have numerous Magid handbags in our collection and were sent photos by relatives. We also went through dozens of historical ads, articles and documents. It was difficult to choose the ones that ultimately appeared in this article.
A.I. Magid history interview Magid purse history special post