SPECIAL POST: Soure’ Bag New York – With Input From a Relative of The Owners

This post will be somewhat unusual because we’re going to start from the end, then go back to the beginning.
Soure’ handbags are one of our absolute favorites and we have many in The Vintage Purse Museum collection. We’ve always wanted to know the company’s history, but for years we were unsuccessful at finding a person’s name associated with the manufacturer name. That is, until we discovered a document from 1969, which explained that a US tariff (more about that later) was responsible for the demise of a number of handbag companies, including Soure’. Having a date helped us find an August 4, 1969 business liquidation notice that gave the name Israel Shikora as the president of Soure’.

And that’s what led us to the beginning of the story. Israel’s father, Louis Shikora (1887-1974; birth name possibly Leibish Sikora) was proprietor of a silk company in 1930, according to the US Census. Louis Shikora was married to Annie (Greenberg) Shikora in 1916, and they had three children, Israel, Martin and Mildred. Per the 1940 Census, Louis was a manufacturer of embroidery. A few years later, he was making his Soure’ bags with Cornely Bonnaz machines, which were specifically utilized in the manufacture of “corde” bags.

Corde is a very distinct type of embroidery. During its two decades as a trend, it was spelled in advertisements and on maker labels with and without an accent on the “e,” capitalized, not capitalized, spelled with a “k,” and so on. (In this article, we are using the generic lower-case, with no accent mark.) It was also the subject of at least one 1940s lawsuit (Soure’ was not one of the parties), which was a battle over the name and trademark. We believe that corde was the first type of purse produced by Soure’, more than likely because Louis already had the machines for his embroidery business, and getting in on the corde handbag trend was a logical decision. 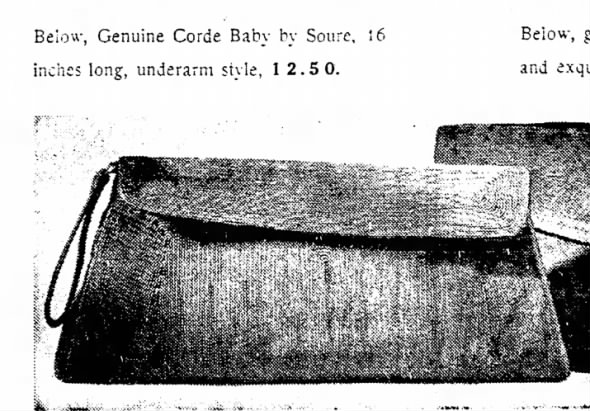 An excellent article about corde bags is on the Antique Aesthetic blog (linked with permission): http://antiqueaesthetic.blogspot.com/2020/05/unraveling-cordes-history-and-my.html.

The Vintage Purse Museum discovered a 1944 advertorial from the Boot Hill Marauder (Dodge City, KS; a US military newspaper), that said “Another Frenchman, Soure, is making ladies handbags, and the PX has a few of these.” We believe these were corde bags, and that whoever wrote this assumed Soure’ was the surname of the maker, as it appeared on the label, and that he was French. This is incorrect, but we cannot confirm why Louis named the company Soure’. Perhaps it’s because the machines he used were French in origin, but there may be a deeper meaning. Soure (with no accent mark) is the name of a municipality in Portugal and a river in Brazil (known for its Portuguese settlements; Portuguese is also the country’s official language). Many Jews that emigrated to the US in the late 1800s through the 1930s to escape escalating anti-Semitism in areas such as Russia or Poland (where Louis was born) made stops in South America. In fact, Jews had been emigrating to Brazil since the 16th century. It could be that Louis named his company for Brazil’s Soure river—adding a French-style accent mark to the “e”. Note that this is just conjecture. While we did find some of his travel records, we could not find any evidence that he was ever in South America.

We emailed Dr. Stuart Shikora, grandson of Louis and son of Israel, and asked if he could help fill in some blanks. He very kindly responded with a return email. Dr. Shikora remembered the corde bags and machines that were at his grandfather’s factory.“The Corde’ was my grandfather Louis’ specialty,” wrote Dr. Shikora. “I clearly remember him decorating fabric for the handbags. When the business was sold the Corde’ machines were highly desired.”  According to a 1947 newspaper advertisement, Soure’ was located at 109 W. 38th St., New York. We did not find any promotional articles or advertorials about Soure’, so we can’t confirm all of its addresses, however we know that when it closed in 1969, it was located at 30 E. 33rd St., which was a building that housed many a handbag company over the years. The aforementioned 1947 classified ad was in a Boston newspaper. A New England regional handbag salesman was needed at Soure’, an “old-established manufacturer of corde evening bags and belts.”

We also found a 1956 Miami, Florida newspaper advertisement for Soure’ handbags that called them “Soure of Miami.” Dr. Shikora confirmed that the bags were only made in New York. It’s likely the newspaper incorrectly identified them as being made in Miami because Florida was secondary to New York in handbag manufacturing during that era. Many New York makers had vacation homes in Florida, and some moved their operations there. This is not the case for Soure’, although Dr. Shikora says his grandfather Louis wintered in Miami during his later years. We also found a 1945 Florida Census document that indicates Louis’s son Israel and his wife briefly lived in Fort Myers, Florida. It appears he was stationed there for a time while in the Army. 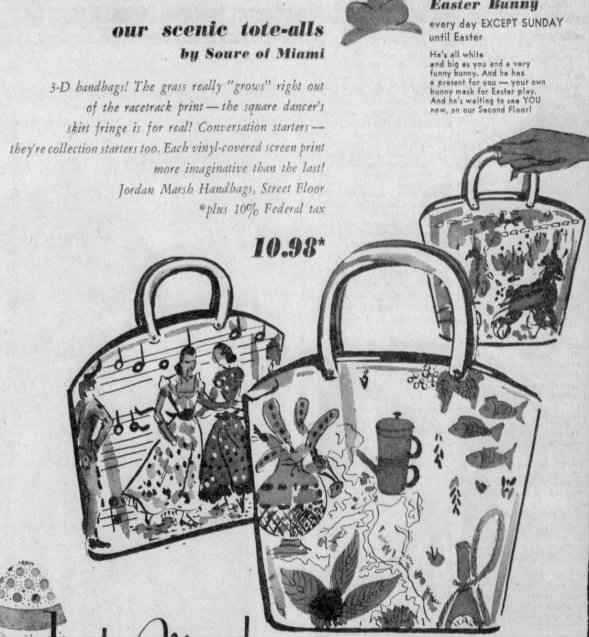 Israel Shikora (1919-1984) and Louis’s younger son Martin Shikora (1921-2013) went to work for their father’s company after the end of their enlistment in the US Armed Forces while serving in WWII. The Vintage Purse Museum found a 1945 Brooklyn Daily Eagle newspaper article that tells of Lt. Martin Shikora’s service as an Air Force aviator.

It’s unclear precisely what year Soure’ began, but Dr. Shikora knows that it was in full operation by 1944, so at least a few years before. The earliest newspaper ad we could find for Soure’ corde bags is from 1943 and the most recent Soure’ corde ad is from 1949. This does not mean they weren’t made earlier or later by Soure’, however, by the mid-1950s, the corde trend started to decline in favor of other styles.

That’s when Soure’ started going over-the-top with the creativity that makes their purses such a fabulous collectible. This, we learned from Dr. Shikora, was thanks to his father and uncle.

“Israel and Martin did all the designs,” wrote Dr. Shikora. “Besides the appliqué technique on needlepoint and the corde’, I remember the early adoption of screen printing of designs onto fabric, sometimes also receiving appliqué. I don’t know who came up with the designs for screen printing.”

Dr. Shikora told us the inspiration for Martin and Israel’s designs came from the latest fashions in the US and Europe, including those that had needlepoint pieces, which Israel imported from Europe. (Austria was and still is known for its needlework. It’s possible that this is where the needlepoint pieces came from.)

“They had the fine detail work completed already and were meant for people to fill in the background, but Martin and Israel designed a product with glass beads and larger gems applied with glue,” he wrote. “I remember seeing the workers applying the glue and beads in the workrooms.” 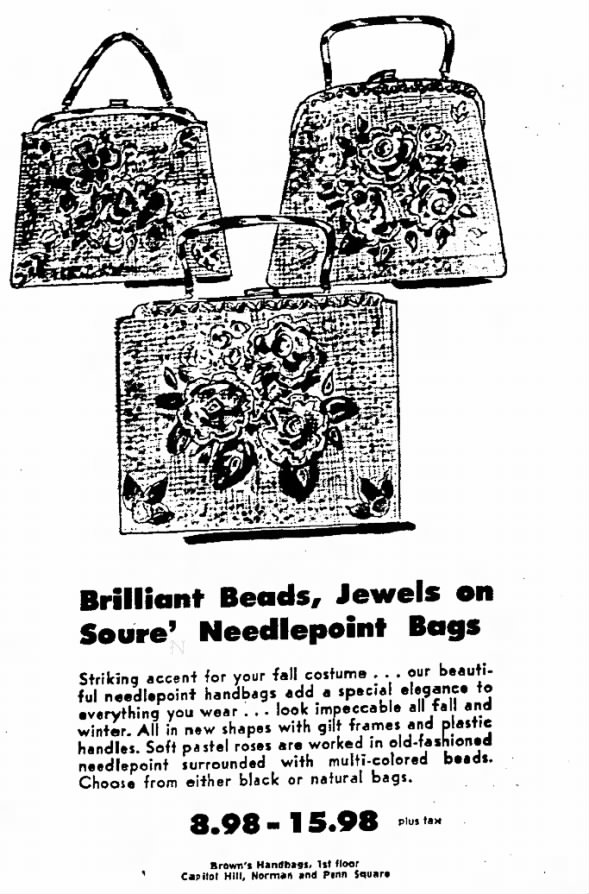 Mon, Sep 5, 1960 – 35 · The Daily Oklahoman (Oklahoma City, Oklahoma) · Newspapers.comThese were the extremely popular needlepoint and beaded bags that generally featured a floral design, but also animals and other motifs. As the years went on, Soure’s styles were increasingly inventive and interesting, including the 1950s screen-printed designs referred to by Dr. Shikora. It’s unclear if Louis sold the company to his sons, or allowed them to take it over and what year that occurred.

“Martin and Israel worked together for most of the company’s life,” wrote Dr. Shikora. “Israel then bought out Martin’s interest in the company. Martin went on to do sales with another company, presumably Lou Taylor.”

The Vintage Purse Museum found several mid-1970s newspaper ads featuring Marty Shikora as a representative for Lou Taylor handbags, visiting department stores in cities across the US. These appearances are generally known as “trunk shows.”

Soure’ Bag Co. continued to make beautiful and whimsical bags throughout the 1960s. Then, the General Agreement on Tariffs and Trade (GATT-1948), a set of multilateral trade agreements originally ratified in 1947, strongly affected businesses during its 1964-1967 “Kennedy Round” (named for President Kennedy, who predeceased the negotiations). This deal worsened the market as the US was importing more bags than it sold, causing American companies to close rather than be forced to lower employee wages and benefits. The Vintage Purse Museum found a US House Ways and Means Committee Hearing transcript from 1970 that had an addendum listing the handbag companies that went out of business from 1968-1969 due to the GATT Kennedy Round. Among them was Soure’ Bag Co., which closed its doors in February 1969, leaving 36 workers unemployed.

“It’s interesting to know that the tariff situation might have contributed to the company’s demise,” wrote Dr. Shikora in response to our findings. He was in college during this time and wasn’t aware of these circumstances. “Whatever the cause, it was a painful event in my father’s life, as he had worked at the company his entire life after leaving the military. Israel tried design and sales with other companies, but with little success.”

We at The Vintage Purse Museum felt sad to learn of this. Our hope is that the relatives of these creative, hardworking handbag makers take solace in the fact that the Soure’ brand is still valued, a true treasure and an exciting collectible for vintage purse aficionados.

Special thanks to Dr. Stuart Shikora for his input. Other information was found on the newspaper archive Newspapers.com, genealogy website Myheritage.com, Antique Aesthetic (@Mishflora on Instagram) and miscellaneous online public documents. Note: We have many Soure' handbags in the collection. Not all are pictured here.